Amid Record Stock Prices, Fed Policy Is A Risk 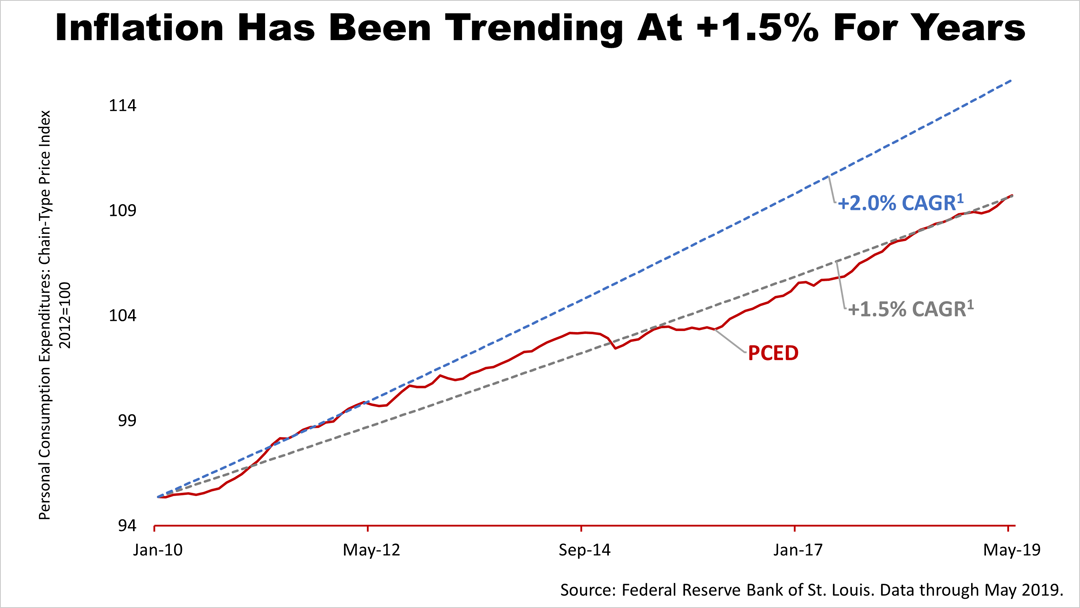 Stocks closed at an all-time high again on Friday and the latest economic data — though it shows growth is slowing — indicates no recession is on the horizon. The Federal Reserve Board's inflation policy is perhaps the biggest risk to the 10-year old expansion.

Today's jobs report was much stronger than expected. Unemployment remained at a low in June last seen a half century ago. The latest monthly survey of 60 economists polled by The Wall Street Journal showed that the professionals are not expecting a recession. The monthly surveys of purchasing managers at manufacturing as well as non-manufacturing companies reported less robust business conditions but continued growth.

However, the Federal Reserve Board's June 19th economic forecast was unrelenting in its forecast for inflation of 2%. This chart compiled by independent economist Fritz Meyer, which we license, shows a 2% compound annual growth rate of inflation trendline in blue, which is what the Fed has been calling for nine years. The Fed's forecast for 2% inflation was correct in 2011 and 2012 but has been off year after year since 2013. The actual inflation rate has been much closer to 1.5% for five years and the Fed's June 19th policy statement continued to insist that this is transitory. On December 19th, 2018, when the Fed raised rates and tightened credit based on its inflation model, it caused a flash bear market in stocks, chilled holiday retail sales, and caused jitters about the future of the expansion. Since all recessions since 1954 were caused by a Fed mistake, the Fed's inflation policy will be key to a continued expansion.

To Read the Full Story, Subscribe or Sign In
This article was written by a professional financial journalist for Advisor Products and is not intended as legal or investment advice.